BMW iX Interior wows with its design and materials choices

by Wei Fullmer on November 12, 2020 in Interior Design

BMW’s giant-grilled exterior design has been getting a lot of attention. And by “attention,” I largely mean “derision.” Yet, it can be argued that the beauty of BMW’s latest design turn resides on the inside. From the 3 Series to the 8 Series, BMW interiors are less conservative, functional and overtly German than ever before. Buttons and controls are minimized visually while still being within easy reach and view. There is more brightwork and trim pieces, be it wood, metal or other. Leather is stitched interestingly, knobs are crafted in crystal and buttons coated in ceramic. In other words, the interiors are more interesting and obviously luxurious.

I would argue that this started with the BMW i3. Though derided for being dorky on the outside, its interior was a treat to behold and to use. Its wave of open-pore wood spanning the dash and the available gray cloth seats with naturally tanned leather accents were particular standout features.

Now we have the 2022 BMW iX, the brand’s all-electric crossover arriving in dealers in the first half of 2022. Its bold and innovative interior clearly sprouts from the same branch of the family tree as the i3, yet it moves the ball forward with some of the fancier jewelry that’s been popping up on ritzier Series BMWs and introduces some new elements. Let’s take a closer look. 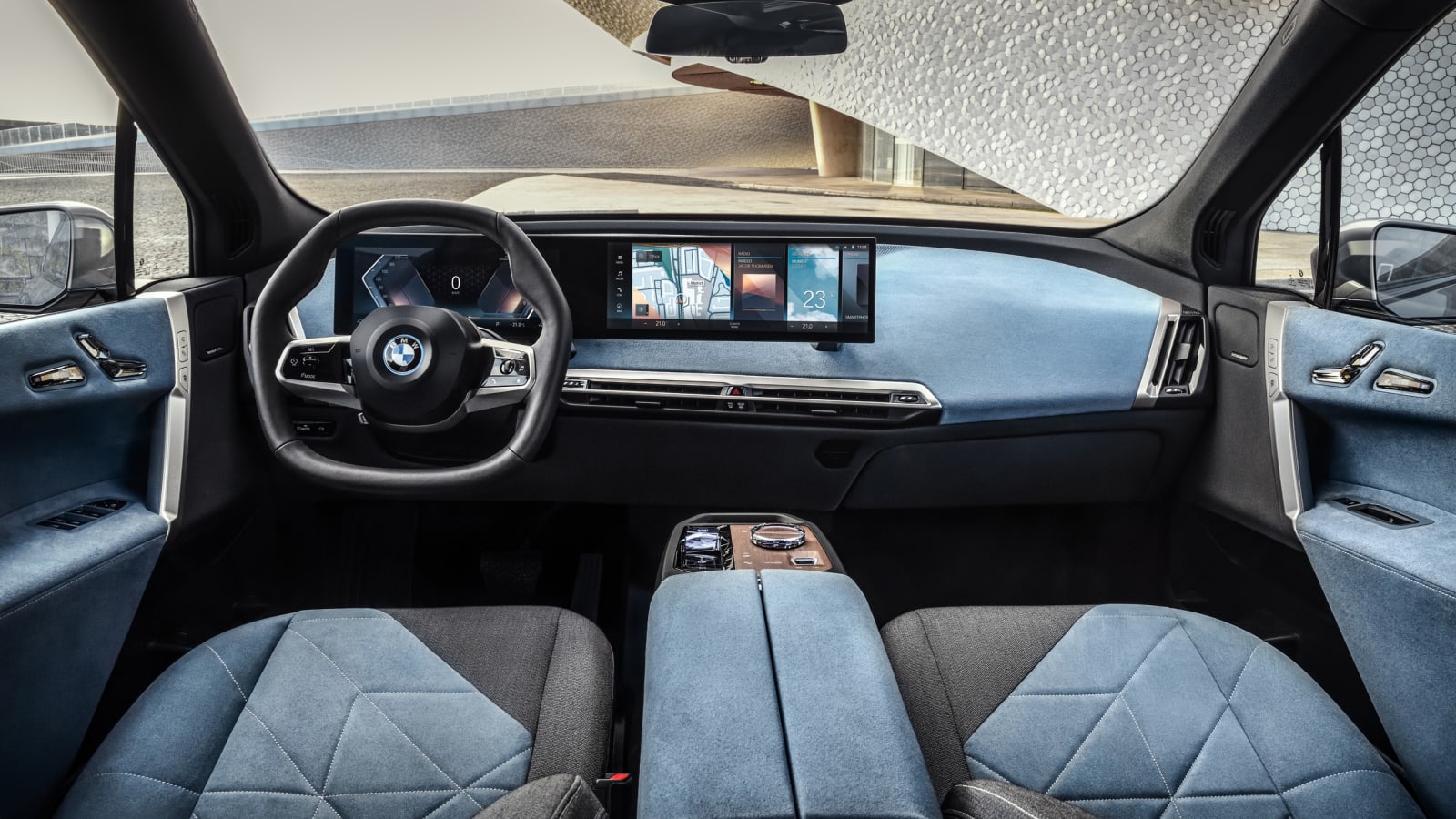 Like the i3, the infotainment display floats above a broad, downward-sloping dash with the minimized air vents along the bottom. The iX’s screen, however, makes the i3’s look like a 1980s Sony Trinitron. It’s wider, curved(!) and mounted on feet hidden from the driver’s sight that make it appear as if it’s floating. Nifty. Though covered by a single piece of anti-reflective glass, the unit is effectively broken into a 12.3-inch instrument cluster and a 14.9-inch infotainment display operated by touch or the latest version of BMW’s iDrive controller on the center console. It is also running “the next-generation BMW Operation System.” 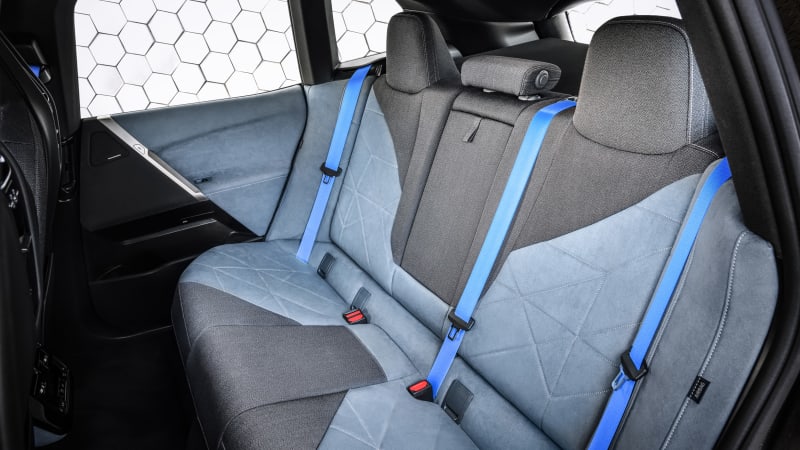 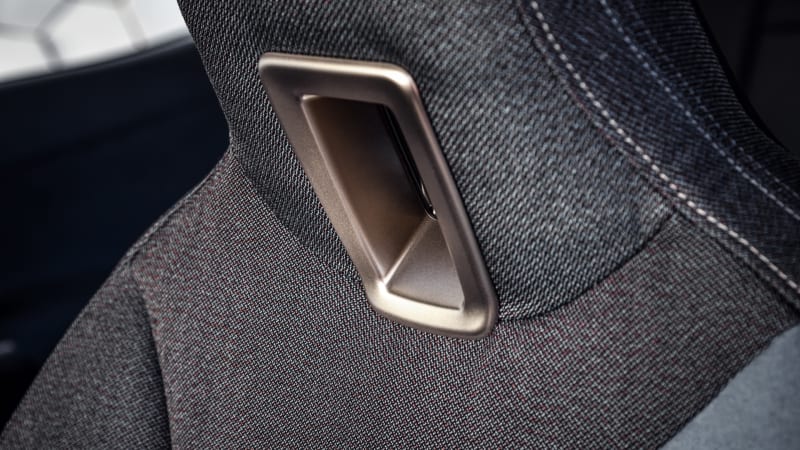 Like the i3 and i8, the iX interior features elements sourced from recycled or natural materials. It also offers customers a choice of alternative eco- and animal-friendly materials. Done up in a color scheme that is distinctive if a tad Jay Leno, this interior treatment known as “Loft” features a denim-like textile mixed with a microfiber cloth embossed with a geometric pattern.

Leather hasn’t always been the defacto choice for luxury car interiors. In fact, it’s a fairly recent thing. Considering that leather is temperature-sensitive and prone to excessive wear, it’s hardly an ideal seating material. Light-colored leathers are also prone to sucking up dirt and dye from jeans. Basically what I’m saying is “more alternative interior options would be nice.”

Of course, the iX can still be done up in good old-fashioned cow. In this case, tanned an orangey red. 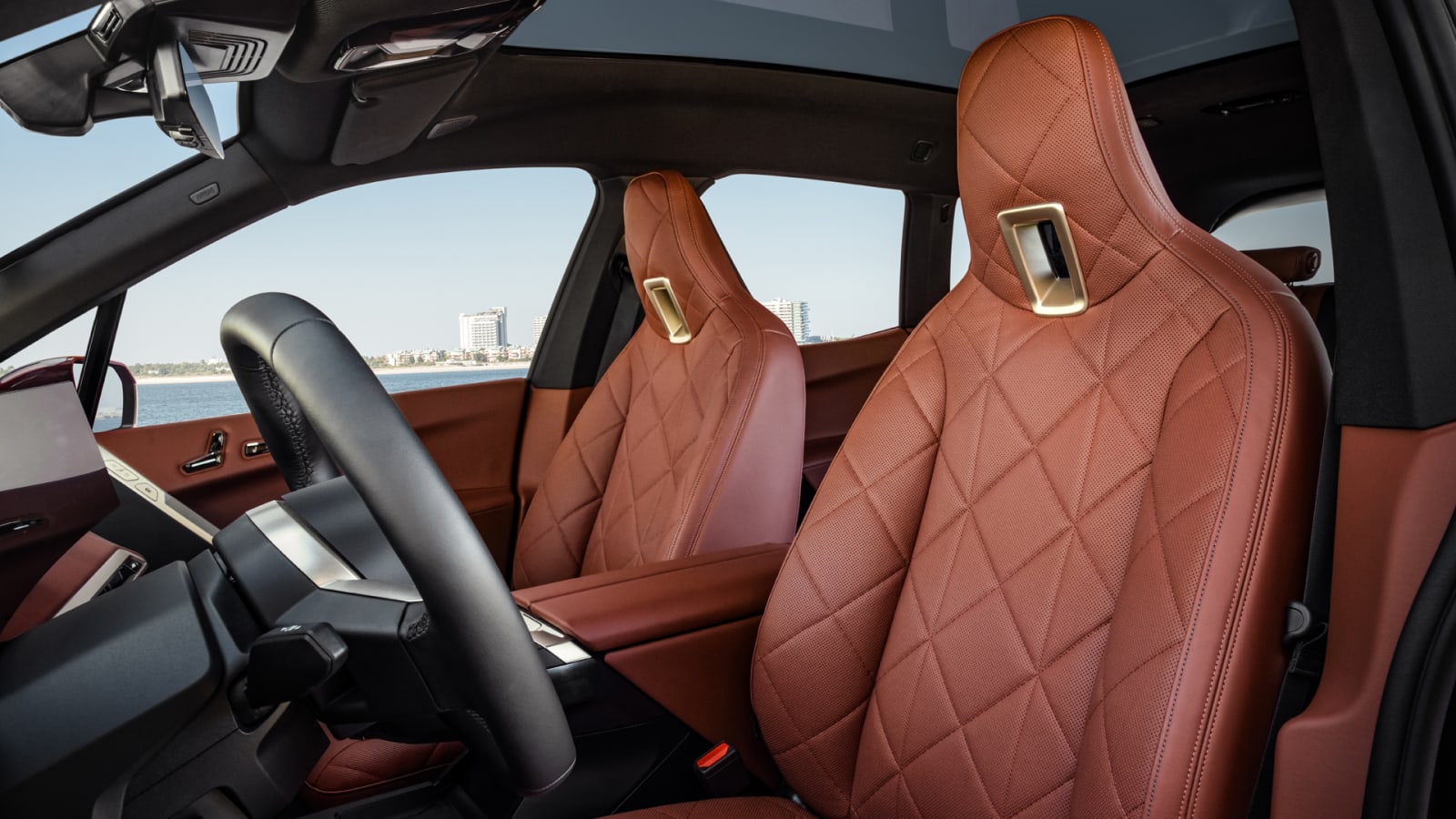 Yet, there is more notable here than just the color and diamond quilting. This is “natural leather” treated in a natural olive leaf extract, which apparently avoids the “production residue” that is harmful to the environment. Great. 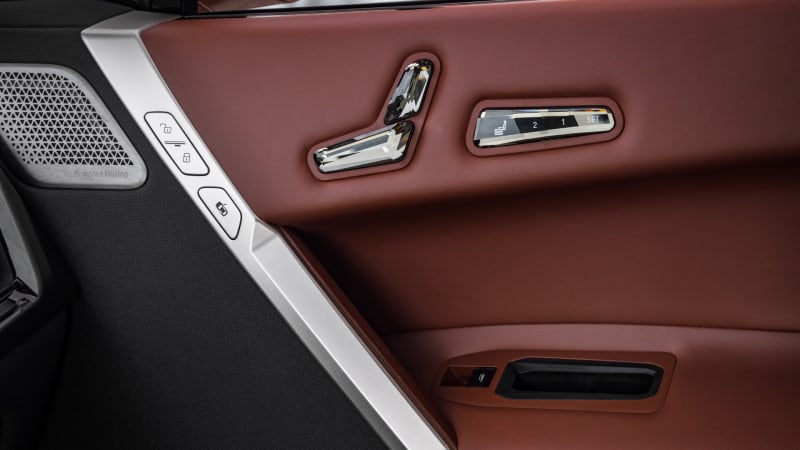 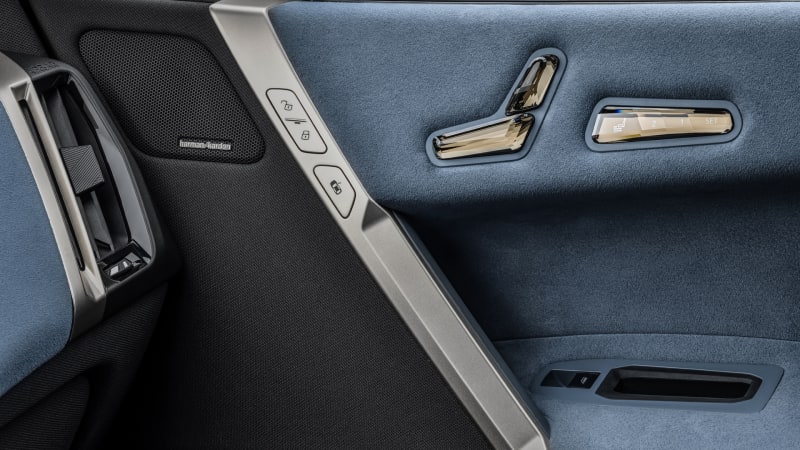 Let’s also note that the colors and seating materials extend to the doors (though I suppose, in the case of the leather interiors, the doors could in fact be covered in BMW’s SensaTec vinyl).

There are other noteworthy elements in this picture. First, we see new switchgear. The door lock buttons are new and the doors themselves open with the push of a button rather than a handle. The latter is less of an advancement, as such electronic, button-activated door “handles” are almost always annoying. And they require a mechanical override somewhere anyway (see Corvette).

And there’s another thing … 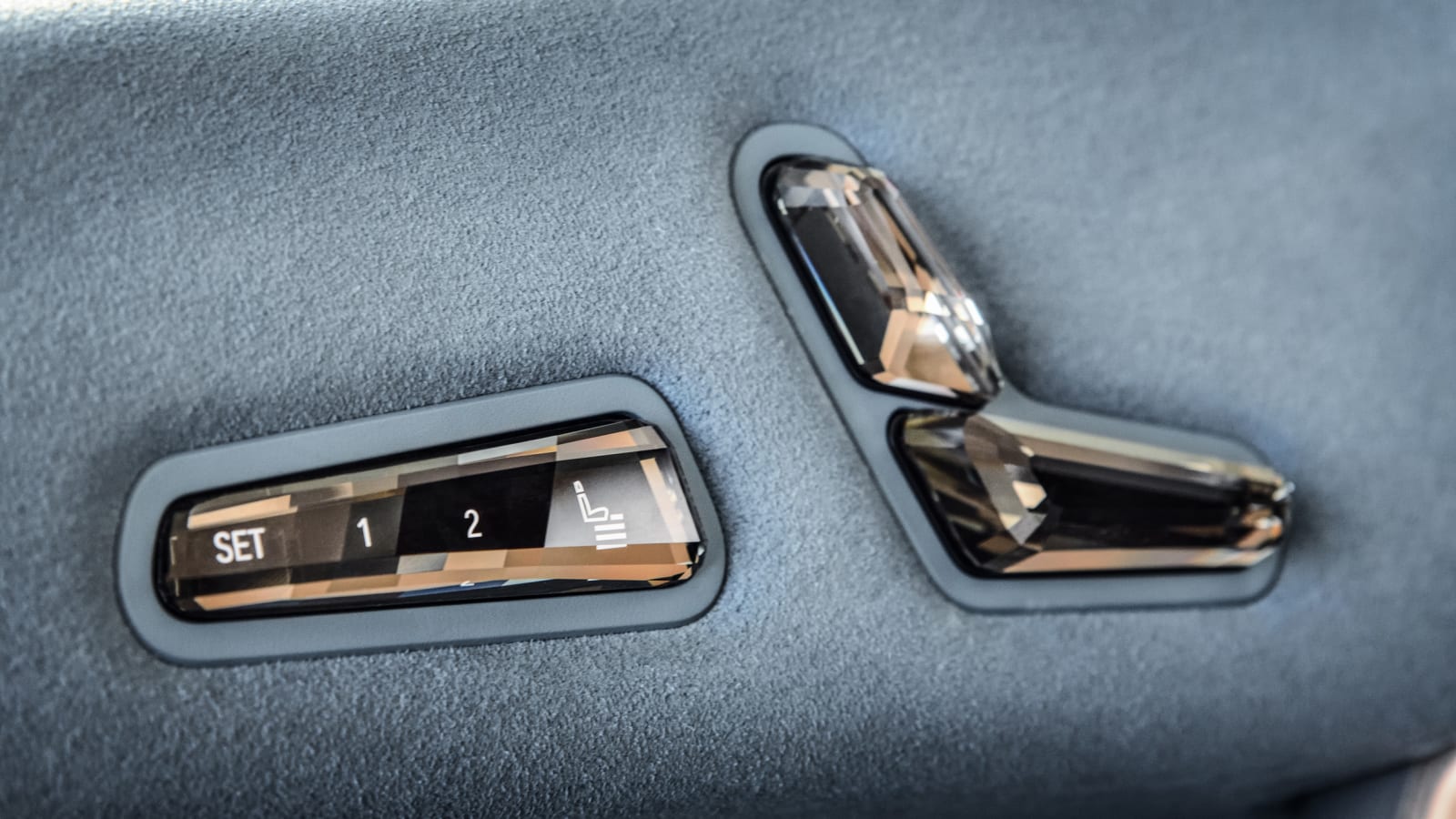 BMW has not only moved the seat-adjustment controls to the doors, Mercedes style, but they are crafted with what is described as a “glass-effect finish.” So, it’s plastic, but it looks nice! And different. Different is good. 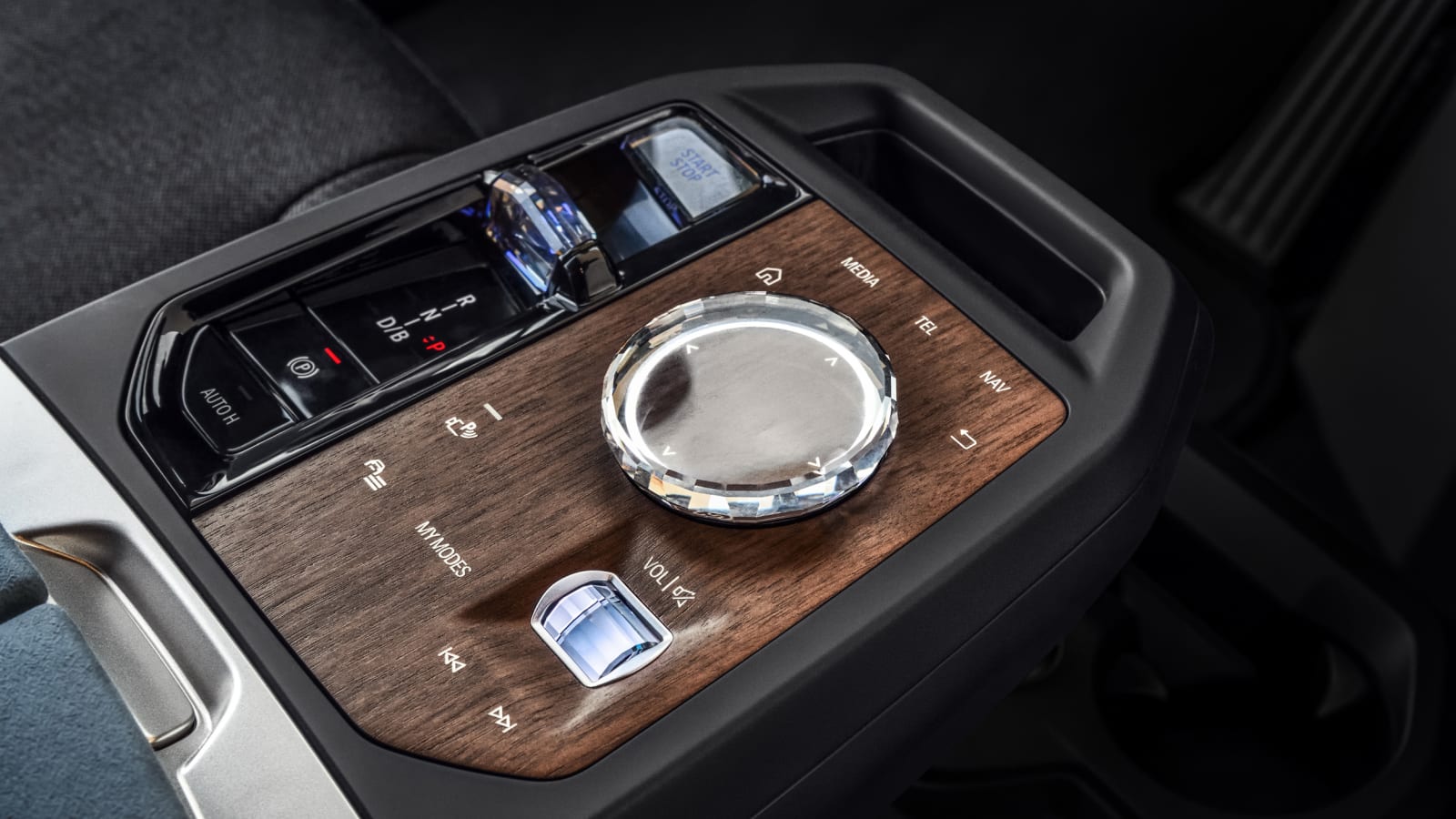 On the center console, you can see the iDrive knob also has the “glass-effect finish,” but the real interesting thing is that the touch-sensitive menu shortcut buttons are housed in the sustainably sourced wood trim. How cool is that? It’s electronic wood!

BMW has also, finally(!), placed the volume control adjacent to the iDrive controller rather than a foot away on the dash. Audi did this from the very beginning with its old MMI system (and Mazda continues to), while Mercedes utilizes a similar placement and thumbwheel rolling-log-thingy.

The shifter shown here is also a little nub thing, also done up in “glass-effect finish.” This would be another new element for a BMW, as it’s different from the knobs found in Series cars as well as the wheel-adjacent pod found in the i3. 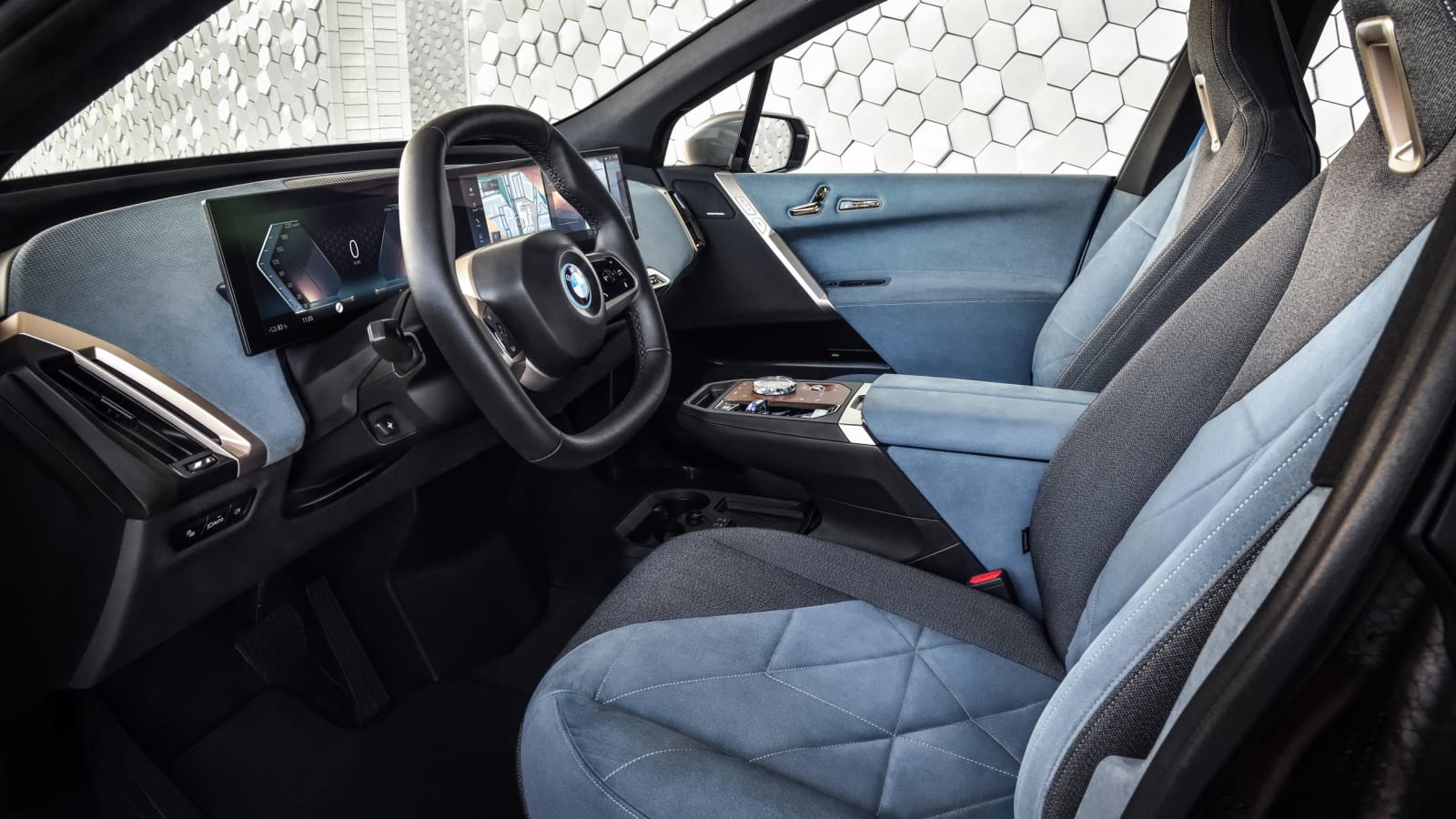 The iX doesn’t quite have the same open floor area as the i3 does, but it’s close. You should still be able to store a purse between the seats on the flat floor, but there’s more secure storage located under the control pod plus a traditional under-armrest bin with clamshell doors.

Now, some other details … 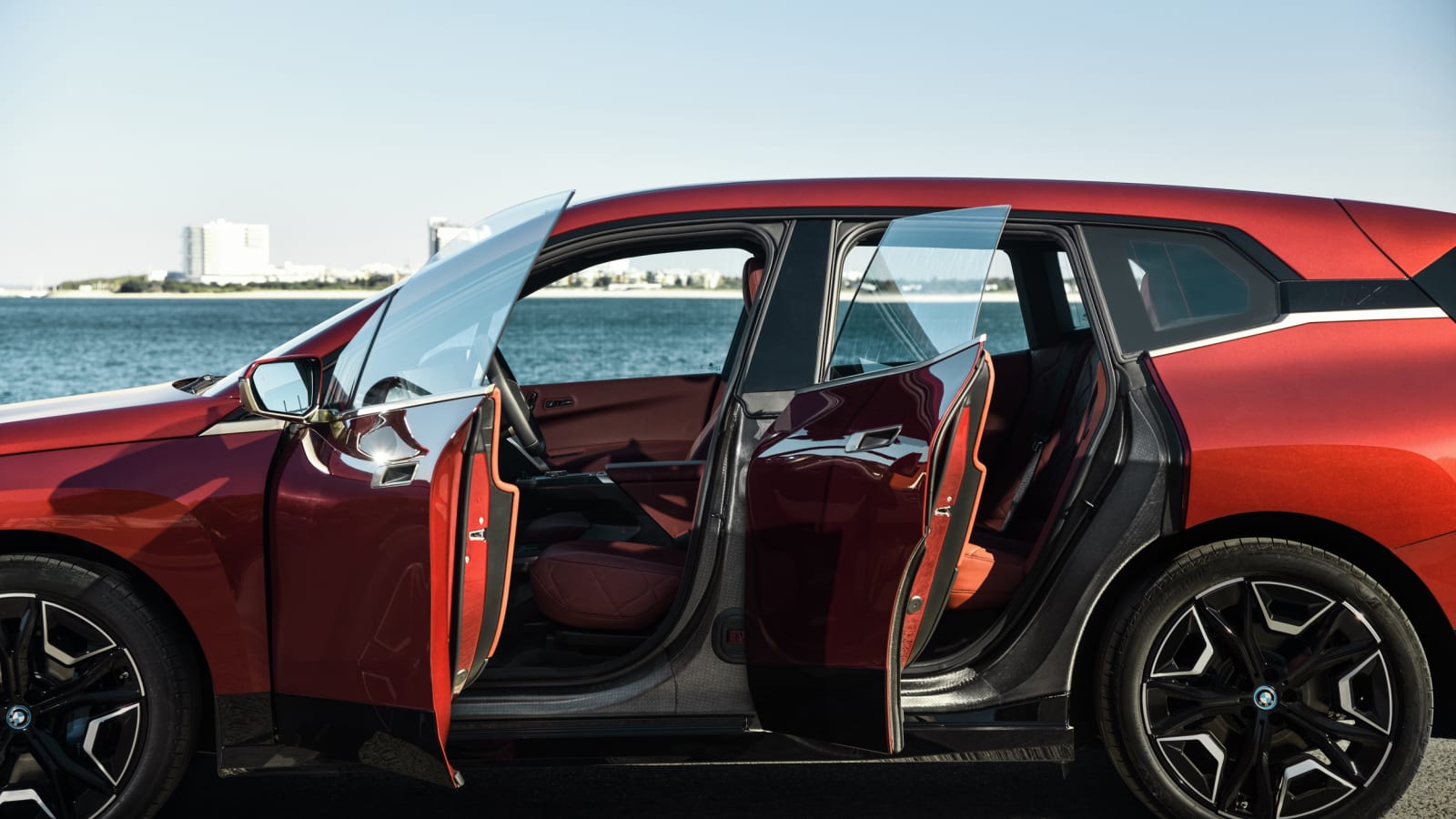 It has frameless doors! You can also see the carbon fiber reinforced plastic unibody here.

This also provides a decent idea of how much back-seat room there is. The electric powertrain allows for a long wheelbase and therefore maximizes interior space. BMW describes this as a “lounge-like” interior. 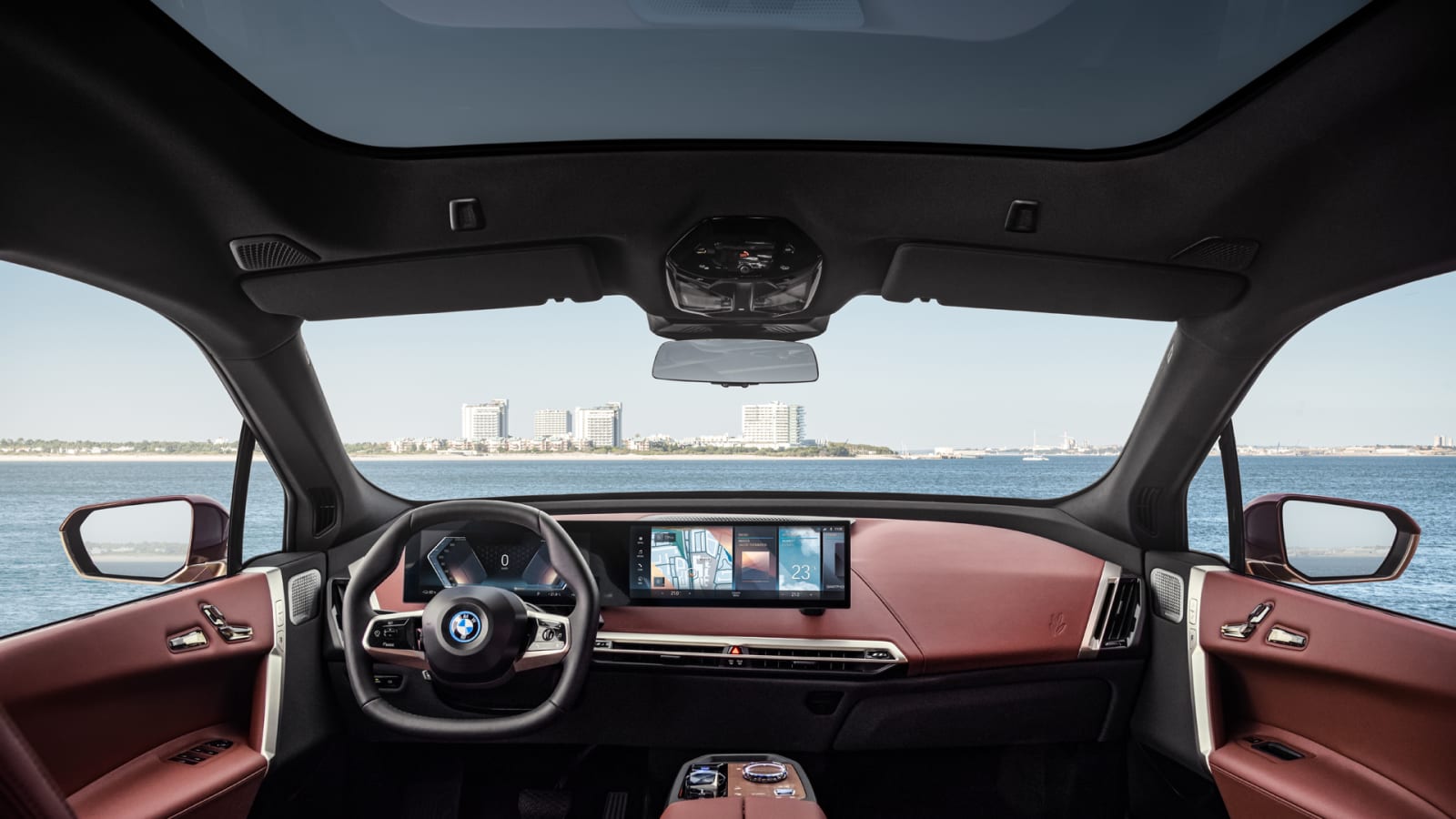 Finally, BMW spent a lot of virtual ink waxing poetically about the iX’s “groundbreaking” panoramic glass roof. Then failed to provide a single picture of the thing. This is the best I could do.

It appears to be one solid, unopenable glass roof, but actually consists of a steel frame, two laminated glass panels and three layers of film sandwiched between. It has a “triple silver low emittance coating” to reduce the chances of the cabin becoming a Venus-like greenhouse, but the real sun-defying trick is the PDLC or Polymer Dispersed Liquid Crystal technology that increases and decreases the roof’s tint by applying electricity to it. Or, to put it in a way only understandable to a Star Trek science officer, “The liquid crystals dispersed as droplets in a polymer matrix are aligned by electrical energy to allow rays of light to pass through into the interior unimpeded.” Thank you, Lieutenant.

Its “Shade Mode” is automatically activated when the iX is parked.

So, while BMW’s exterior design will continue to “challenge” its beholders (designer Domagoj Dukec has literally said that’s the goal), the interior(s) has a far greater chance of achieving wider approval. Its design, materials choice and forward-thinking are all appropriately futuristic for a car like the iX.